The Hohenzollern of Hoboken 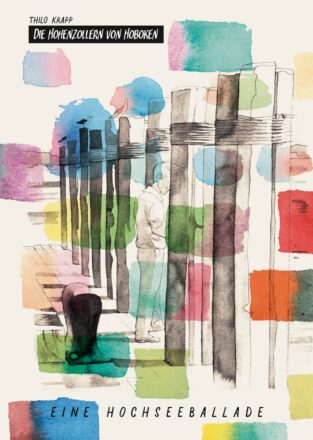 Baltimore 1940.
Some grand german oceanliners from the 1900s are rusting in the Patuxent River, converted to storage ships. It‘s Paul‘s and Steve‘s night shift.
That night, in the abandoned luxurious rooms, Paul remembers how he travelled on the liner during his service in World War I. And how he met Friedrich.

The short story ‘The Hohenzollern of Hoboken‘ mixes real historic events with a new story around two seamen during World War I. Some of the german oceanliners (two of them being the very first ‘four stackers‘) were confiscated during that time in the United States and converted into troop ships. After the war, they were given to the government as reparations and either put back into civilian service (with new names), or, if proven to be not profitable enough, used as storage rooms (still containing their luxurious interiors).

I was wondering: How must it have been to be on one of those splendid liners, crossing the Atlantic in lavishly decorated rooms, but with a total different goal during war times, the former cafés and restaurants converted into infirmaries and offices? And what if you have served on these ships as a troop member – but later reencountering the same halls and rooms were you have been as a soldier, now serving as a security guard? Because that‘s the story of Paul, the main character, who remembers his time in war service – and the queer encounter in his life that could‘ve implied more than he knew.

I printed this on Munken paper, which gives the traditional art (watercolor) an appropriate feel, and will sell it at the 18th Erlangen International Comic Salon (May 31st – June 3, 2018) at the Egmont booth – where I will also sign my ‘War of the Worlds‘ graphic novel adaption, seriously faithful to and devotedly drawn after the famous H.G. Wells novella, that I‘ve done with this publisher.